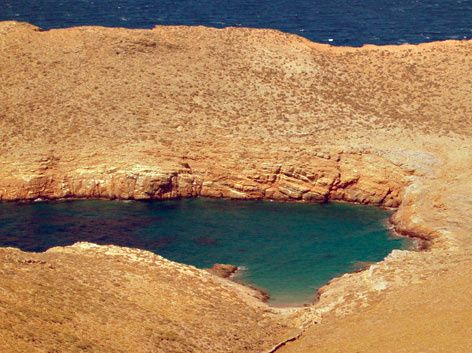 The small beach located just below the cape of Kefalos to the West that creates a small shelter between steep cliffs. It is a closed bay which mainly forms the tip of the cape.

One can visit the beach of Kefalos from the sea only by boat as it is a small bay where when the winds are high the approach is not easy.

* Through road and footpath

To reach Kefalos by land, you should start from the Baths (by car or motorbike) with direction toward Agios Sostis and Mamakou. Continue north down the road towards but do not turn right to the beach of Agios Sostis. We do the same later when we continue straight past the turn to Mamakou bay. Follow the road to where it ends and then continue on foot down the path that will lead you to the cape of Kefalos. The route of the trail will reward us as well in several places the journey will reveal both the Western coast and the eastern coast of Kythnos!

FEATURED ACCOMMODATION - We have selected various types of accommodation (hotels, rooms, studios, apartments, villas) from various regions of Kythnos with various options such as: overlooking the sea, budget options or with the typical friendly atmosphere or direct access for swimming in the sea...